As with humans the symptoms started small. The beginning showed with the odd sleeping positions she began to use. 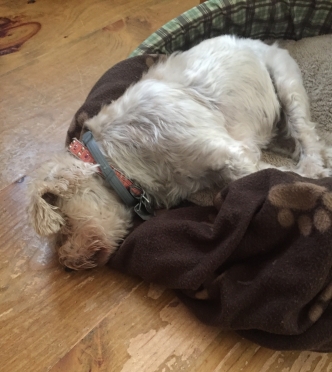 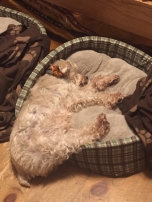 Crazy way to sleep but okay if that’s your new thing. It wasn’t many months before other things showed up.  She became terrified of haircuts. Whereas before she endured them with patience, she now fought the groomer tooth and nail. We decided just to let her hair grow.

She started being stuck under wheelchairs and walkers as if she’d forgotten how to back up. We had to move the barrier for her.

Soon it became a constant duty of myself, my husband or our grandson to redirect Peaches out of her dead ends. Sometimes our help wasn’t appreciated and she would pretend to bite us. Having just a few teeth, we weren’t worried. 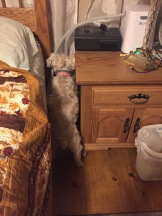 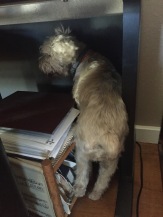 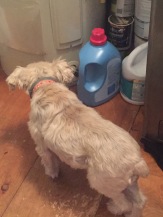 She no longer seemed to notice feelings of wet or discomfort. My floor got mopped so much more due to Peaches spilling water several times a day. 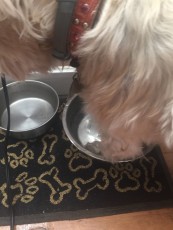 At the end Peaches, though the vet said she had a strong heart, lost strength in her legs. She would stand staring at nothing then slide to the floor when her shaking legs gave out. 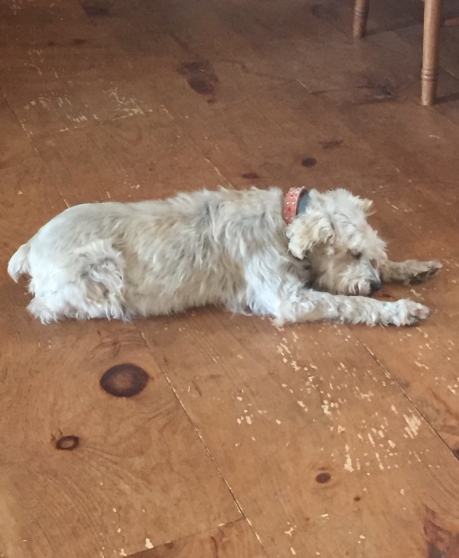 We spent months with our little dementia dog, caring for her as well as we knew how. The beginning years of her life were terrible in an abusive puppy mill and when we got her we had bonded in a very special way. It was hard to let my little girl go. I took comfort in the knowledge that the last half of her life had been filled with love and peace.

The days came when she no longer knew where she was. She began crying as she wandered the house. My own dad had come to a point where he didn’t know us and I prayed God would take him home. He died the next week. Now it was time for Peaches to be at rest. I miss you little girl may you run in the fields of heaven.

I had a little debate recently concerning buying a dog from a breeder or getting a rescue. I have done both. The first schnauzer I owned was bought from a breeder. Her name was Mrs. Beasley (My little sister had recently died. Mrs. Beasley was the name of her favorite doll.)

Mrs. Beasley was a joy although a little head strong, which is normal for a schnauzer. They’ve been called the dog with a human brain. I tried to keep her mind stimulated, while I was at work, by hiding treats around the house.

After a while, we decided to find Beasley a companion. We found one at the schnauzer rescue in Tulsa, while visiting relatives. She had been rescued from a puppy mill. Mrs. Miniver came into our lives. This was our first encounter with a blank slate. She knew absolutely nothing. Though a blank slate, Mrs. Miniver was friendly and loved Mrs. Beasley.

(My granddaughter, Leah, with Miniver and Beasley. Beasley is upside down. )

Minna, as we called her, was not easy to train. To her, I was speaking a foreign language. What a joyous day when she comprehended! She came into the room, stood still, staring at me. I looked at her expectant face. “Do you need to go out?” Her happy dance told me the answer. We could understand each other! I was euphoric all day. I told everyone who would listen – “She talked to me!”

Beasley & Minna playing on the couch

When Beasley and Minna died we went back to the internet to find a needy dog. My experience with Mrs. Miniver had made me partial to rescues. The schnauzer rescue, Angel Pets, had a dog, seized from a really terrible puppy mill. The police were called in for the seizure. They said the dogs were so badly matted, they couldn’t tell the breed. At Angel Pets, we acquired a terrified bundle, we named Peaches. She had been shaved because of the matting. She was older, estimated to be about eight years old. She was not friendly like Minna. Every time we touched her she would quiver, hiding her head. I made a point of touching her all the time, petting her, telling her she was safe. It took  a couple of months before she stopped quivering at my touch. Abused, she had many fears.

After a few months of working with our Peaches, we decided we could use some backup help. We looked for another schnauzer. The new schnauzer was rescued from the pound. The story went that she had been spoiled by her family.  But, when they found out they were pregnant, they took her to the pound. We named her Sugar. She was a year old and arrived with pink painted toe nails. She also, came with a high squealing bark, which she used frequently. We quickly started training the squeal out of her with saying “Uh-uh” or if necessary a light squirt of water. 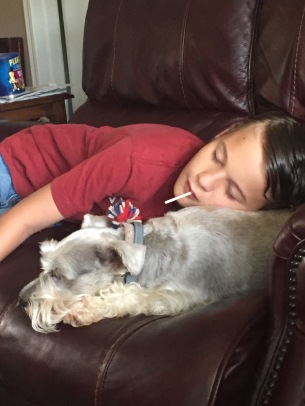 Thinking the dogs would bond like Beasley and Minna, we were surprised, they didn’t. They ignored each other. We’ve had them both for over four years. They have become buddies but never play together. Sugar is always ready for a game of fetch. Peaches doesn’t seem to know how to play. Being a grandma now, maybe she’s too old. She’s just about totally deaf at twelve years old. Her eyesight has diminished. Ironically, this helped with her fears. She no longer hears the thunder or sees people move. She sleeps a lot except when it’s time to eat. Then she dances in front of us, to remind us.

Sugar is still spoiled though I don’t paint her nails. She doesn’t like when Peaches gets confused ending up in her bed. She’ll stare at Peaches until I switch her to the right bed. They both enjoy the yard searching for wild rabbits (which live under our storage), cats and other dogs to bark at. They are both such a pleasure to have around.

Why do I favor rescues over breeders? It’s probably more work. Correction if you get a puppy probably not more. But a different type of work. You have to be patient, kind and loving. But you can’t let them stay in their frightened state. You have to help them face their fears. The reason I pick rescue dogs is because I know I can make a difference in their lives. And in turn they give me love, devotion and a sense of accomplishment.