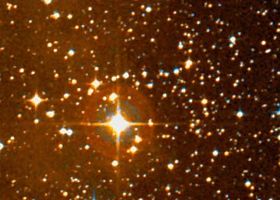 Canis Majoris (or in English – Great Dog) is our galaxy’s largest known star. It was discovered March 7, 1801 by Jerome LaLande. It is known as a red Hypergiant.

This is an actual picture of Canis Majoris from the Rutherford Observatory Sept. 7, 2014.

If Canis Majoris was our sun it would extend beyond Jupiter’s orbit. Our own sun is but a pin prick on the surface of Canis Majoris. An airliner would take 1100 years to fly around the star.

The following clip will give you an idea of the immensity of the universe.